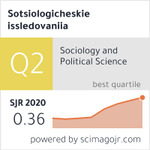 The first issue of “Sociological Studies” (or, briefly - Socis) had appeared in Moscow back in summer 1974. The founding editor of the journal Anatoly G. Khartshev was happy to have overcome all obstacles put by the then Soviet authorities in the way of re-establishing sociological periodic in the country. Central for the journal publications had become, firstly, theoretical issues, and secondly applied research in the factories, offices, cities and rural communities. Methodology, methods and techniques of empirical sociological fieldwork had made up another focal point followed by history of sociology both abroad and in Russia, and contemporary state of art as well as sociologists’ searches home and abroad. The new and somewhat mysterious science had enjoyed considerable attraction among social scientists of the USSR. Some 6 to 8 thousand copies had found their subscribers at the time.

Initially, the journal had been published quarterly, later - bimonthly, and since 1989 it is monthly academic, social and political journal under auspices of the Russian (since 1992) Academy of Sciences, - a body of leading Russian scientists since 1728. Editorial board and editorial staff consider themselves as a mirror of contemporary Russian sociology with all its achievements and failures eager to reflect in the journal’s pages current level of sociology in Russia, both in traditional centers of social scholarship and in Russia’s regions, universities and research institutions.